A small town surrounded by beauty in the heart of the highlands.

The small town of Boquete can be found nestled within the lush mountainous highlands of Panama’s ChiriquÍ Province, just east of the Costa Rican border.

Its downtown area resides around a small park less than a block in size, lined with a couple of restaurants, hostels, souvenir shops, a café and grocery store.

Though small in size, its location grants it proximity to much grander perks, including some of the most alluring natural features of Panama.

One of these is Volcán Barú, a dormant volcano to the west, which also happens to be the highest point in the country at 3,474 meters high (11,398 feet), making it a popular hike for both locals and tourists.

The hike is long, steep and strenuous, but for those up to the challenge, it’s said to be well worth it. On a clear day, you can see both the Pacific Ocean and Caribbean Sea from the summit.

Shot less than a few miles from the Pacific Coast of Panama, this shows a rare cloudless view of Volcan Baru./Photo By Sachagriffin (Own work) [CC BY-SA 3.0 (http://creativecommons.org/licenses/by-sa/3.0)%5D, via Wikimedia Commons

Information on hiking alone or on guided tours can be found on the Complete Guide to the Volcán Barú.

Running from the volcano and through the town is the Caldera River.

The Caldera River as seen from a hike to The Lost Waterfalls. © Tey-Marie Astudillo 2014.

Shot from over a small Bridge in Boquete, where the Caldera River flows. © Tey-Marie Astudillo 2014.

The power and magnitude of the volcano and river has created marvelous features that people can enjoy, such as the Caldera Hot Springs (locally known as Los Pozos de Caldera) and The Lost Waterfalls.

The second of the three Lost Waterfalls. © Tey-Marie Astudillo 2014.

Overall, there are plenty of things to do in the area, particularly if you like nature.

Touring coffee estates (Boquete is known for having the country’s finest), white-water rafting along the Chiriqui and Chiriqui Viejo rivers, horseback riding, canopying or zip-lining in the rainforest, jungle treks, rocking climbing and birdwatching – are some to name a few.

TripAdvisor has compiled an extensive list of attractions and activities here.

How To Get There 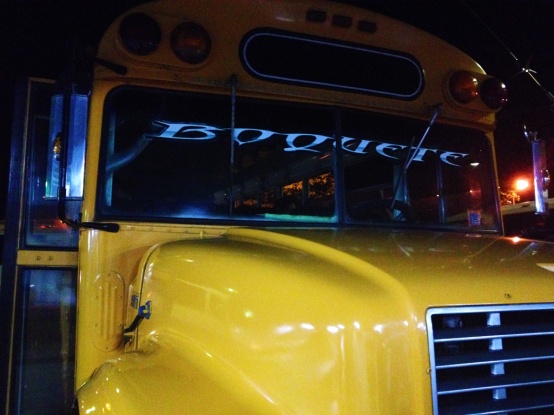 The bus that takes you from David to Boquete. © Tey-Marie Astudillo 2014.

From Panama City’s Main Bus Terminal at Albrook (Gran Terminal), take a bus to David. The ride is between six and eight hours (depending on whether you take a regular bus during the day or an overnight express bus). Schedules and prices can be found here.

Once at David Terminal you can catch a bus to Boquete. The bus leaves every 30 minutes from 6am to 9pm. The ride takes approximately one-hour and costs $1.75 per person. 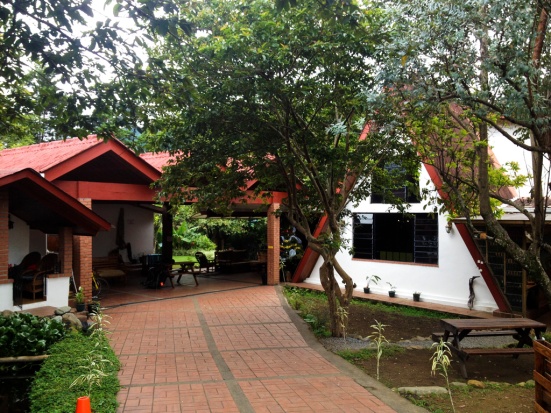 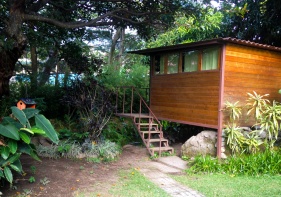 View of cabin along the river at back end of Refugio del Rio. © Tey-Marie Astudillo 2014. 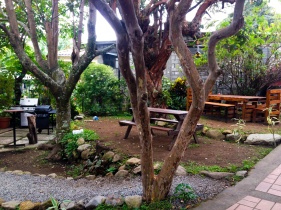 There are plenty of hostels to choose from. I personally recommend  Refugio del Rio. They have a convenient location just outside of the downtown area, with friendly staff who are happy to assist you with whatever information you might need.

Their accommodation ranges from dorms to private rooms, and I believe they just started offering tents to camp as well.

If you happen to find yourself in Panama, or close to the Panamanian frontier in Costa Rica, and are looking to get away from the heat and crowds, then mosey on over to Boquete – a location with a cooler feel (literally – it can get chilly up there) and beautiful scenic setting.

It might just be everything you’ve been looking for.