For many throughout the world, New Years has already come and gone – but not in Korea. Here the celebrations are just about to kick off, and unlike the West, the festivities last for more than just 24 hours.

In Korea, New Years isn’t celebrated January 1st as it is in Western countries. That’s because Korea and many other Asian cultures (China, Mongolia, Tibet, Vietnam, etc.) celebrate the New Year of the Lunar Calendar rather than the Gregorian Calendar.

Each country has its own name and traditions for the Lunar New Year. In Korea it’s called Seollal (so-lal) and it’s one of the most important holidays of the year.

The day is observed on the second new moon after the beginning of winter solstice and is always celebrated for a period of three days, including the day before and the day after.

During this time, school and work are closed while masses of people in the cities travel to smaller towns throughout the region reunite with their families

Some head to the East Sea (Sea of Japan) to watch the first sunrise of the New Year at one of the sunrise festivals.

So many people commute during this time that it consequently makes it one of the most busy and expensive times to travel in Korea.

For the holiday, children wear traditional Hanboks. It customary for them to bow to their grandparents and elders, who in return give them a little money as a gift.

Like many Korean holidays, the focus of the celebration is to honor ancestors, so families will perform memorial ceremonies, called Charye, by saying prayers and making traditional food. 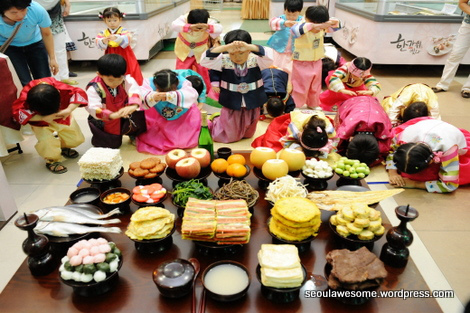 The most common dish associated with Seollal is Tteokguk – a broth-like soup of rice cakes and seasoning.

The kids play folk games, the most popular of which is Yut Nori, a board game played with sticks scored on a number point system (sorry kiddies, no League of Legends today).

If you’re a foreigner like myself, you can find various cultural performances and presentations going on during this time.

Visiting palaces and folk villages are also a good idea, since these venues are open during the holiday and provide a contextual insight into Korea’s rich history and culture.

But if you really want an authentic experience of Seollal, hook up with the locals – either a Korean friend of co-worker of yours – and spend a day with them and their family.

Inviting one’s self is never polite, but just mention you’ll be spending the holiday alone, or that you’re really curious to partake in the holiday’s festivities.

Koreans are very welcoming and proud of their heritage, so odds are they’ll invite you and probably even insist that you come.

Just remember to bring a small gift as a token of your gratitude.  This isn’t like gift-giving in the states, meaning you won’t have to break the bank.

A nice box of fresh mandarins or oranges will do the trick, especially since they’re cheap (you can get about 20 for 5,000 won on a street market) and common as hospitality gifts in Korea.